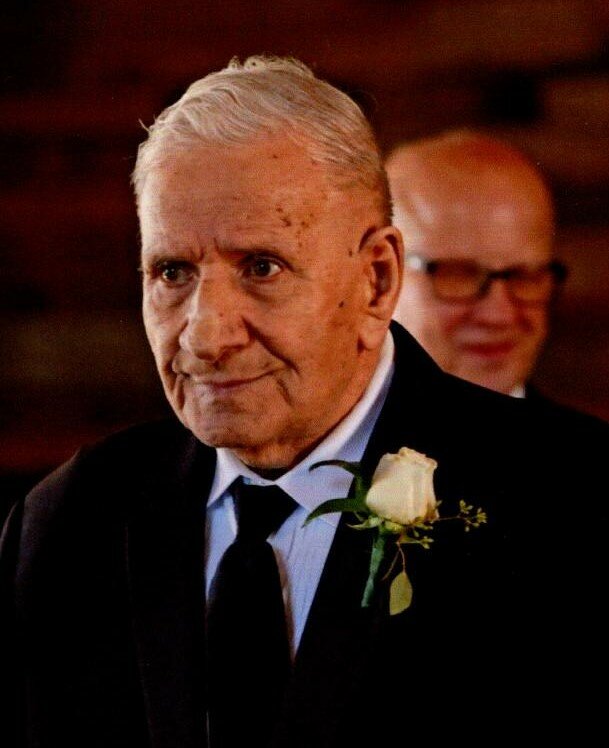 Please share a memory of Victor to include in a keepsake book for family and friends.
View Tribute Book
Victor P Antonuccio, 98 of Jamestown passed Tuesday December 20, 2022 at Heritage Park Nursing Home. He was born November 2, 1924 in Punxsutawney PA, the son of the late Anthony and Mary Antonuccio. Victor proudly served our country in the United States Army. He served during WWII in the first infantry with the Big Red One. Victor received a Purple Heart and other medals for his service and bravery. After returning home Victor worked as a mechanic until his retirement. His passion was working on cars or anything with an engine. Victor was loved by his family, friends, and pets. He will be deeply missed. Surviving is his wife of 43 years, Carol J Antonuccio, his daughters, Karen (Tom) Foley and Kathy (Dan) Petruccello, his son, David Antonuccio, his grandchildren, Rob Petruccello, Danny (Rachel) Petruccello, Renee (Ben) Gibson, Ian Foley and Chris Foley, his two great grandchildren, Beren Gibson and Rosalie Petruccello and his step son, Gary Cordosi. Besides his parents, Victor was preceded in death by his first wife, Beatrice Pilato, his brothers, Sam Antonuccio, Patsy (Rose) Antonuccio, Anthony (Kay) Antonuccio and Nick (Edna) Antonuccio, his sister, Josephine (Sam) Caruso and his step daughter, Gina Perrin. Arrangements entrusted to Riccardi’s Hubert Funeral Home. Visitation and funeral services will not be observed. Send a condolence by visiting www.hubertfuneralhome.com
To send flowers to the family or plant a tree in memory of Victor Antonuccio, please visit Tribute Store

Look inside to read what others have shared
Family and friends are coming together online to create a special keepsake. Every memory left on the online obituary will be automatically included in this book.
View Tribute Book
Services for Victor Antonuccio
There are no events scheduled. You can still show your support by sending flowers directly to the family, or planting a memorial tree in memory of Victor Antonuccio.
Visit the Tribute Store
Share A Memory
Send Flowers
Plant a Tree