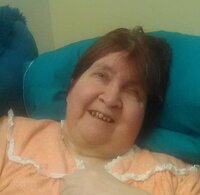 Kathryn M Gogolski, 69 of Jamestown passed away September 28, 2021 at Lutheran Retirement Home. She was born September 7, 1952 in Washington DC a daughter of Robert and Dorothy Gogolski. Kathryn loved to learn. After graduating collage with an associate degree in medical recording, she continued taking collage courses in various areas of study. Kathryn was a very determined person. Even though she was handicapped she chose to live an independent life style. She refused to let a disability slow her down. Kathryn had many friends in the community especially in the handicapped community. After moving to Lutheran Home Kathryn continued to stay in touch with her friends via her computer. She also made many friends within the Lutheran Home. Kathryn will be deeply missed by all who knew her. Kathryn is survived by her sisters, Jean Gogolski, Deborah Leighton and Carol (Kevin) Collar. Also surviving are several nieces, nephews, and cousins. Kathryn was preceded in death by her parents, Robert and Dorothy Gogolski. Arrangements entrusted to Riccardi’s Hubert Funeral Home. A Memorial service will be held at a later date. Send a condolence by visiting www.hubert funeralhome.com