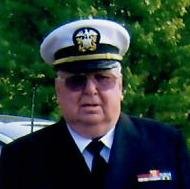 Howard E Paulson, 89 of Jamestown passed away January 25, 2021 at UPMC Chautauqua. He was born January 6, 1932 in Wesleyville, PA the son of Albin and Nellie Anderson. Howard served in the United States Navy from 1950-1954 during the Korean War. Upon his honorable discharge after 32 years of military service, Howard worked for the Jamestown BPU as head of maintenance until his retirement. Howard was an enthusiast of his 1957 Oldsmobile. He was an avid Golfer. Howard enjoyed NASCAR, The Buffalo Bills, and The New York Yankees. He loved life and loved spending time with family and friends. Howard leaves behind his wife of over 30 years, Lois Eimers Paulson, his children, Bradley (Annette) Paulson, Jodie (Leslie) Hutchens, Julie (Dr. William) Faricellie III, Brian (Janelle) Paulson, and John (Meredith) Tallman, and several grandchildren. Also surviving are many nieces, nephews, and cousins. Howard is preceded in death by his parents and his grandson, Aaron Paulson. Arrangements entrusted to Hubert Funeral Home. As per Howard’s wishes there will be no services. In lieu of flowers donations may be made to a charity of one’s choice. Send a condolence by visiting www.hubetfuneralhome.com