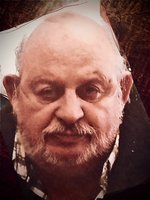 Carl Ross Destro, Sr., 73, of Jamestown, died Friday (January 8, 2021) in UPMC Chautauqua following a brief illness. He was born July 7, 1947 in Jamestown, the son of Carl Frank and Maxine Laura Case Destro. A U.S. Army veteran, he served in Korea as a guard at the Demilitarized Zone. Following his military service, he was employed by the former Chautauqua Hardware Corp until he retired at the time the company closed. He was a member of John W. Tiffany Post 53, Veterans of Foreign Wars, enjoyed target shooting, fishing, going to the casino, and classic vintage old cars. Surviving are his wife, Katherine McCormick Destro, whom he married June 8, 2019; three sons: Carl R. Destro, Jr. of Kennedy, Aaron Q. Destro of Jamestown, and Mitchell N. (Julie) Destro of Sugar Grove, Pa.; seven grandchildren: Ethan, Lauralin, Hallie, Annaliese, Isaac, Keaton, and Mataya Destro; a sister Suzanne Destro Huddleson; and a great granddaughter on the way, Athena Destro. In addition to his parents, he was preceded in death by his first wife and mother of his three sons, Linda Lee Way Destro, whom he married in 1975, and who died Dec. 5, 2008; and by two brothers: Leo and Jerry Atkins. Due to COVID-19 precautions, a celebration of Carl’s life will be held at a later date to be announced. The family suggests that memorials be made to Chautauqua County Humane Society, 2825 Strunk Rd., Jamestown NY 14701 Hubert Funeral Home is handling arrangements. To send a message to the family, please visit www.hubertfuneralhome.com.